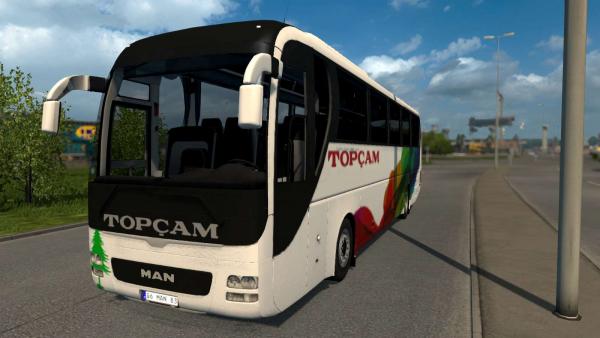 In 1990, MAN introduced the all-new Lion’s Coach multipurpose bus, designed to transport passengers on urban, suburban and tourist routes. In terms of comfort, it practically does not differ from the more advanced MAN Lion's Regio model. The popularity of the passenger vehicle was so great that its export options were sent to the markets of many countries, under the name MAN Fortuna. In our case, we have a virtual version of MAN of the second generation, the release of which was launched in 2002, and it is this option that players will experience in the ETS 2 simulator.

The MAN Lion’s Coach bus mod for Euro Truck Simulator 2 is built on a 4x2 chassis, equipped with an engine with 420 horsepower and a six-speed gearbox. The authors realized the original interior of the cabin in high quality, as well as the animation of the dashboard. Modification developers did not forget to add a couple of characteristic skins and their own color schemes. In addition, the driver has the opportunity to open and close the door using the button: O.

Dear user of the site, for passenger transportation by bus, do not forget to download and install Passenger mod for all ETS 2 simulator versions!
MAN bus
Previous modNext mod

Coach Scania CMA Estrelao, designed for Latin America, begins to conquer the vast road network of the game Euro Truck Simulator 2. The virtual version of the passenger vehicle has the option of...

The three-axle version of the MAN Lion's Coach (MAN Fortuna) tourist bus is built on a chassis with a 6x2 wheel arrangement. The developers implemented four engines with a capacity of 320, 360, 400...