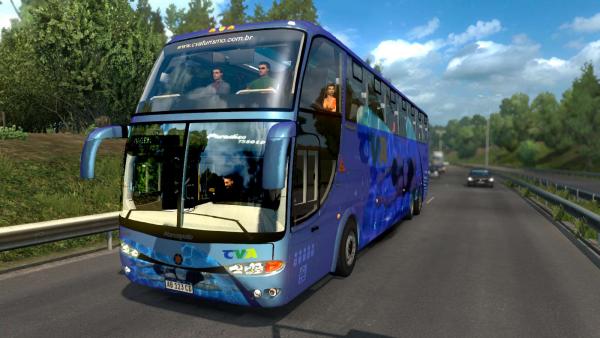 In 1999, the Brazilian concern completed the development and mass production of a new model of the Marcopolo Paradiso G6 1550 LD bus, the main purpose of which is the transportation of passengers on suburban and intercity routes. The appearance of the vehicle is quite easily recognizable, and resembles the Paradiso G7 1800 DD from the same manufacturer.

The Marcopolo Paradiso G6 1550 LD bus mod for Euro Truck Simulator 2 is built on a 6x2 chassis, optionally equipped with one of the engines with a capacity of 360 to 730 horsepower. In addition, six gearboxes are available at 6, 8 and 12 speeds. The virtual trucker is given the opportunity to tint the glass, change the configuration of the headlights, modify the colors of the seats, choose the interior and seat passengers in the seats. The new representative of public transport will become a decoration for the ETS 2 simulator for the player, because in addition to everything listed above, the authors have written their own physics, added a set of original soundtracks and sixteen high-quality colorful skins.