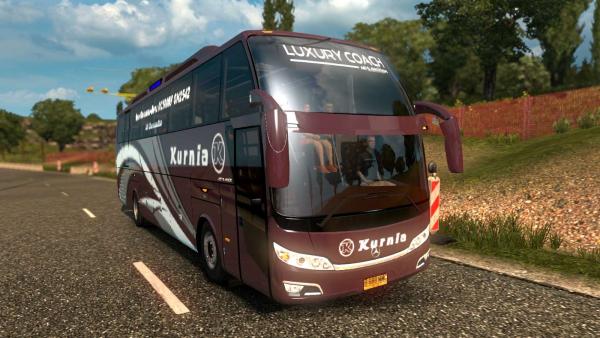 The Neoplan Jetliner bus series was produced by the German manufacturer of passenger vehicles until 2000. The bus gained particular popularity in the countries of Asia, where it is widely used today for commuter and intercity communication. Depending on the modification, its length varies from 10 to 11 meters.

The Neoplan Jetliner MT passenger bus mod for Euro Truck Simulator 2 includes three engines with 320, 598 and 625 horsepower, and the same number of gearboxes for six and twelve speeds. The right-hand drive configuration will allow the player of the ETS 2 simulator to use vehicles both in the UK in a standard game location and on additional maps with left-hand traffic, for example, Indonesia. The authors of the modification added several characteristic skins, two types of interior, interchangeable attributes and an original pack of sound effects.

Dear user of the site, for passenger transportation by bus, do not forget to download and install Passenger mod for all ETS 2 simulator versions!
Neoplan bus
Previous modNext mod

The new Maruti / Ashok Leyland bus from the homeland of tea, elephants and endless warm sandy beaches will now delight fans of the ETS 2 simulator. The Indian vehicle is built on a two-axle chassis,...

Spanish buses Irizar i8 is almost impossible to meet on roads outside this country, since they are not supplied to the international market. However, Euro Truck Simulator 2 players have the...

For long hours driving, it was seldom possible to meet realistic buses on the roads of characteristic quality, mostly these are faceless standard passenger cars of unknown brands. But this monotony...