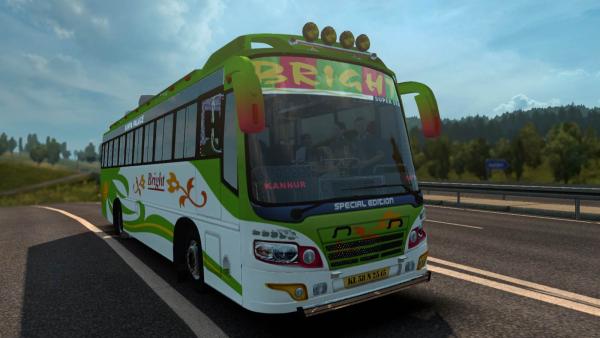 What is India famous for? Of course tea, elephants and warm sandy beaches. However, this Asian country is also known for the automotive industry. One of the flagships of the state is the Ashok Leyland plant for the production of trucks, military equipment and passenger vehicles. The company is a subsidiary of the Hinduja Group, headquartered in London.

The Maruti / Ashok Leyland bus mod for Euro Truck Simulator 2 has a right-hand drive, so you can recommend using it on standard UK roads, or on third-party maps that implement locations of countries with left-hand traffic, such as Java. The vehicle is built on a biaxial chassis, in technical terms it is equipped with two engines with a capacity of 560 and 878 horsepower and a pair of gearboxes for six and twelve speeds. The authors of the modification carefully recreated the original interior of the passenger compartment and driver's seat, as well as prescribed their own physics and added a characteristic set of sounds. If desired, in any garage of the ETS 2 simulator there is the possibility of seating passengers, choosing the right skin and turning on the exhaust animation. The addition is rich in an assortment of spare parts, tuning elements and additional items, among which the player has access to lighting devices, roof luggage, radiator grills, wheel covers, a ladder at the rear of the bus, mirrors and much more.

For the modification to work correctly on version 1.31, the fix must have priority over the main mode!

Dear user of the site, for passenger transportation by bus, do not forget to download and install Passenger mod for all ETS 2 simulator versions!
bus Maruti Ashok
Previous modNext mod

The Venezuelan passenger bus Encava 3300 is limited in gaming capabilities, but is useful for lovers of passenger traffic, as it has a pretty colorful look, thanks to the bright original skin, and...

The Neoplan Jetliner MT passenger bus was produced until 2000. It gained special popularity in the countries of Asia, where it is successfully operated today in suburban and intercity routes. The...