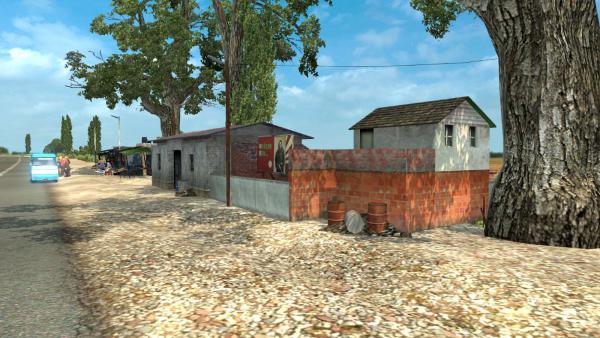 It has long been difficult to surprise the avid virtual truckers with the new exotic regions in the ETS 2 simulator. However, many additional maps are often autonomous, which is not so convenient for passing the game process. The prototype of the creation of the new location was the central region of the island of Java, which is part of Indonesia, in the vastness of which the player also has the opportunity to ride.

The mod map of the central part of Java for Euro Truck Simulator 2 includes a small provincial section of Indonesia. The authors have implemented eleven colorful settlements, united by a road network, including high-speed asphalt roads, dirt roads and swampy impassability. Villages and small towns have original buildings that create a peculiar atmosphere, and exotic vegetation emphasizes the tropical climate of the area.

The supplement can not boast of a large territory, but it can compete with large-scale such modifications with confidence, it is ideal for transporting passengers, for carrying out this activity, you can recommend the right-hand drive Legacy Sky SR2, as left-hand traffic operates in the new territory. The tropical region is located to the west of the UK, where two roads lead to it.

For the correct operation of the add-on, DLC is not required, and for the correct connection of files in the manager, you need to familiarize yourself with ReadMe.txt, which is in the downloaded archive.