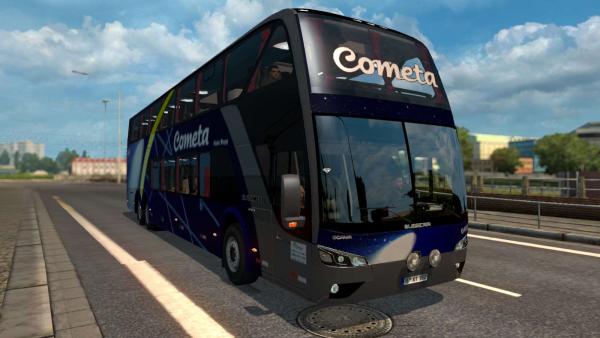 The line of tourist buses Scania Busscar Panoramico DD, unlike the Elegance 360, has a two-story body layout, is available in modifications on the chassis with three and four axles, and has a length of 13.2 to 15 meters, depending on the destination.

The Scania Busscar Panoramico DD bus mod for Euro Truck Simulator 2 is built on a chassis with a 6x2 wheel arrangement, which corresponds to the K420 model. When buying at the Scania dealership, the virtual trucker of the ETS 2 simulator is offered a choice of twelve engines with power from 360 to 730 horsepower and eight gearboxes with different numbers of gears.

The passenger vehicle is made using a high-quality three-dimensional model. The authors recreated the body and the original interior with high detail and full animation with thorough accuracy. In addition, the developers of the add-on added a set of their own sound effects and six branded skins.

A comfortable one and a half floor Busscar Elegance 400 tourist bus from the Brazilian company Busscar Onibus S.A., designed to carry 48 passengers, in the ETS 2 simulator has a photographically...

The Brazilian luxury coach with panoramic windows for the passenger compartment of the Busscar Jum Buss 400 Panoramico in the game world Euro Truck Simulator 2 has a photographically accurate...