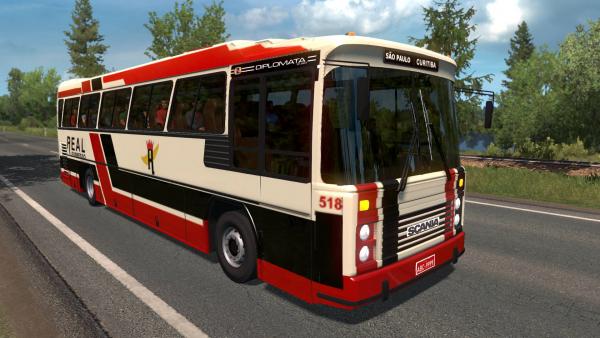 The Nielson Diplomata 2.50 bus, designed to carry 38 passengers, was mass-produced between 1977 and 1981, by the Brazilian company Nielson, which after reorganization changed its name to Busscar Onibus. The passenger vehicle, unlike its more modern counterpart, the Nielson Diplomata 380, is constructed on a two-axle chassis that provides smooth running and maximum comfort on long journeys.

The Nielson Diplomata 2.50 bus mod for Euro Truck Simulator 2 is built on a 4x2 chassis with a realistic three-dimensional body model. The authors have qualitatively recreated the classic interior of the cabin with full animation. When buying a vehicle, or its modernization, the virtual driver of the simulator ETS 2 is given the alternative of choosing an engine from nine available, with a capacity of 320 to 598 horsepower with its own set of sound effects, as well as to choose one of the seven gearboxes for 6, 8 or 12 speeds. In addition, the modification is complemented by twelve colorful skins, the ability to accommodate passengers in the cabin and tinted Windows.

In case the player has the game version 1.31 - 1.34 installed, there is a fix in the archive with the mod, which must be connected in the file Manager with priority.

Dear user of the site, for passenger transportation by bus, do not forget to download and install Passenger mod for all ETS 2 simulator versions!
Nelson bus
Previous modNext mod