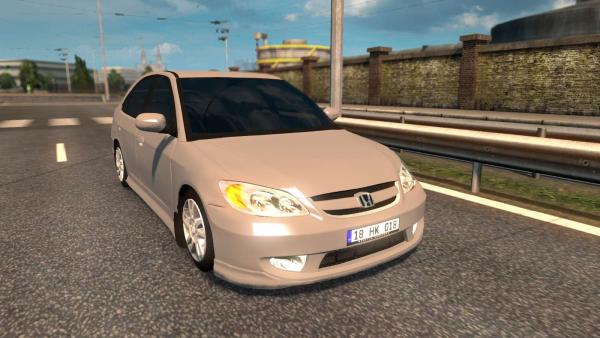 One of the most popular passenger cars Honda Civic, which has compact dimensions, which in urban conditions gives it maximum comfort, began to be produced in 1972. For the entire time of production, the car has undergone many restylings and updates. Thanks to recognition among car owners, the car was able to bring Honda to the top ten largest global automotive manufacturers.

The mod of the seventh generation Honda Civic passenger car sedan for Euro Truck Simulator 2 is based on the original three-dimensional model. When buying a car at a car dealership, or when upgrading in a garage, the player is given a choice of three different suspension options and a large assortment of rims, which you can evaluate when testing on a race track. The car is equipped with a five-speed gearbox and a 1.6-liter engine. The authors of the modification prescribed a characteristic physics of behavior and added a set of their own sound effects. From the external tuning in the ETS 2 simulator there are available radiator grills, replaceable bumpers, lights, headlights, spoilers and other spare parts. I would especially like to note the perfectly implemented interior interior with animation.