After applying the mod, the windows and mirrors are over lightning. How to... 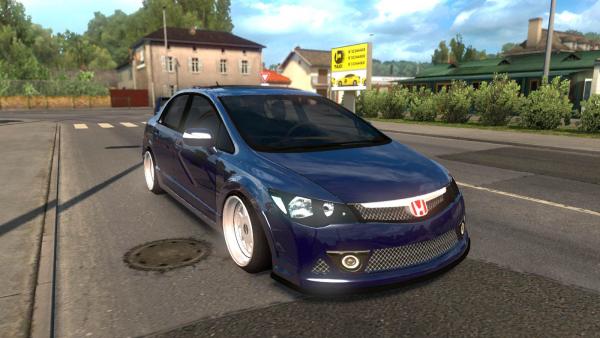 One of Honda's most popular passenger cars, the Honda Civic FD6, was produced between 2005 and 2011. The bulk of the eighth-generation passenger cars were delivered to Russia, Australia and many countries in Africa and Asia.

Honda Civic FD6 passenger car mod for Euro Truck Simulator 2 was recreated using a highly detailed model, the authors implemented their own interior. As well as the seventh-generation Civic car mod, the new modification has a set of spare parts for external tuning, among which the player of the ETS 2 simulator can find options for alloy wheels, hood, radiator grills, bumpers, as well as install a spoiler. And from the power units there is a pair of engines for 160 and 170 horsepower.