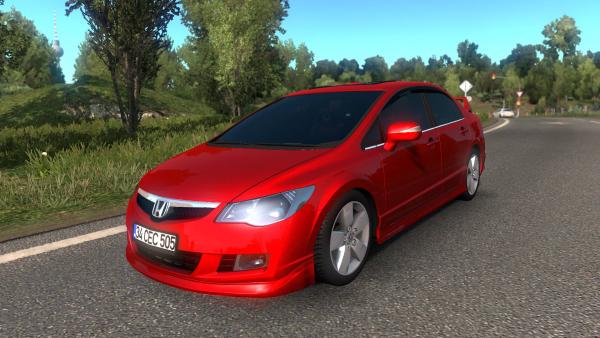 The Japanese car Honda Civic FD6 was produced by Honda from 2005 to 2011, when it was replaced on the assembly line by a new model of the ninth generation, the Civic FB7, which gained widespread popularity.

The mod of the Honda Civic FD6 passenger car for Euro Truck Simulator 2 is based on a high-quality three-dimensional model, which provides photographic accuracy with a prototype. The detailed interior is fully animated and has a high similarity to the real interior. When buying at a car dealership, the player of the ETS 2 simulator is offered a choice of two suspensions, a conventional one and an underestimated one. On the technical side, a 125 horsepower engine with its own set of soundtrack and five-speed automatic transmission are implemented. In addition, there is the possibility of towing a light trailer.