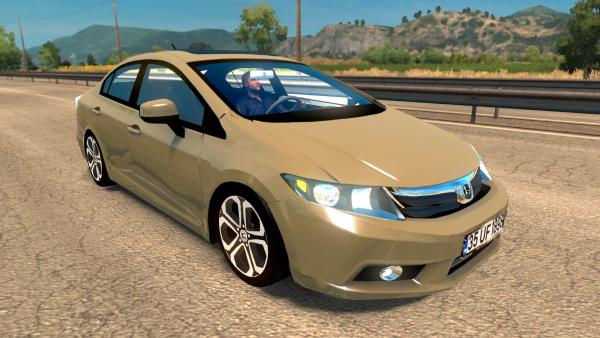 The car Honda Civic FB7 belongs to the ninth generation of the most popular passenger car model from the Japanese company Honda. Serial production of cars was launched in 2011, and replaced the outdated model Honda Civic FD6 on the conveyor.

Mod car Honda Civic FB7 for Euro Truck Simulator 2 has a realistic appearance. Thanks to a high-quality three-dimensional model, the authors of the virtual car managed to achieve almost photographic accuracy not only of the exterior, but also of the interior of the cabin with correctly implemented animation. When buying a car, the player of the ETS 2 simulator can choose a suspension, either conventional or understated, and choose an engine from two options available to suit his needs. In addition, there are a couple of body kits, as well as the possibility of towing a trailer.

Dear site user, for cargo transportation by passenger car, do not forget to download and install the mod Passenger trailer for all ETS 2 simulator versions!
Honda cars
Previous modNext mod

The sports car Honda S2000, from Japanese manufacturers, in the back of a roadster can fundamentally change the specifics of the gameplay. After all, a powerful passenger car can be equipped with...

The South Korean passenger car Hyundai Elantra in a sedan-type body, a conventional and lowered suspension, a well-developed and detailed interior has two types of engines with a volume of 1.8 and...