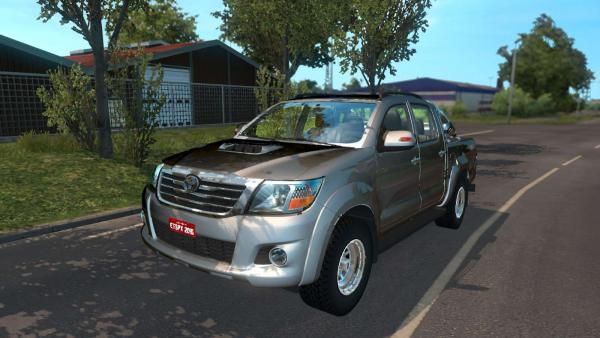 Since 1968, the Japanese company Toyota Motor Corporation began mass production of Toyota Hilux pickups, which were designed to transport small consignments and work in agriculture and communal services. Over time, the car underwent several major updates, as a result, the eighth generation of Hilux, released in 2015, already does not much resemble its distant ancestor, and in appearance is more similar to prestigious cars such as the Range Rover Startech and the like.

The mod of the Toyota Hilux passenger car for Euro Truck Simulator 2 supports metallic body painting and has characteristic skins. For external tuning, the modification developers prepared several sets of branded rims and tires, as well as a significant number of spare parts. The authors implemented their own interior with working animation. And in any garage of the ETS 2 simulator, the player has the opportunity to choose power units from four engines, with a capacity of up to 411 horsepower, and three types of six speed gearboxes.

The luxury Range Rover Startech crossover has a genuinely recreated interior in two colors with prescribed animation of instruments and levers. The virtual driver can choose a set of wheels from the...