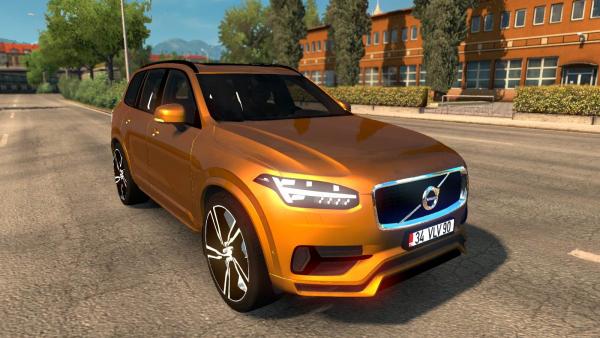 The executive SUV Volvo XC90 was developed at the beginning of the new millennium, which characterized the opening of a new era of Volvo Cars cars. Despite the past two decades since the start of production, the car is still quite popular and in demand, because when compared with the Volvo 850, released a decade ago, there is a huge difference not only in design, but also in the technical stuffing.

The mod of the Volvo XC90 passenger car for Euro Truck Simulator 2 was developed using the original three-dimensional model of the body and a detailed interior, in which the authors registered the animation. When buying at a car dealership or upgrading in a garage, the ETS 2 sim player will be offered a choice of two interior colors, a pair of engines for 170 and 334 horsepower and a six-speed gearbox. In addition, the modification of the Volvo passenger car is complemented by a set of branded wheels.

The passenger car BMW 5-Series E39 was created by the authors using a high-quality three-dimensional model, the authors implemented a pair of engines, one gearbox and four sets of original wheels. Of...

Volvo B9R bus made in excellent quality using a high-quality model. The car dealership offers a choice of low or high landing, which in turn is presented in two versions. For original customization...