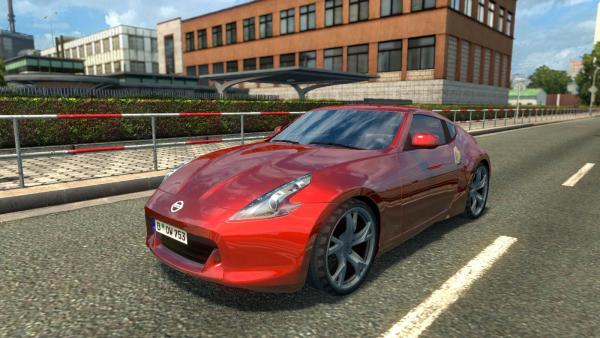 A sports car Nissan 370Z in the back of a two-door coupe, mass produced by the Japanese company Nissan since 2008. In the country of manufacture, this car rolls off the assembly line called Fairlady Z.

The Nissan 370Z passenger car mod for Euro Truck Simulator 2 is equipped with two engine options for 332 and 549 horsepower and one six-speed gearbox. The developers were able to accurately convey the geometry of the fast-moving features of the body of the Nissan sports car, thanks to an excellently executed three-dimensional model, which in terms of quality of execution allowed the mod to be one level higher than the Skyline R34 GT-R. The car will be a pleasant addition to the fans of the ETS 2 simulator, because in addition to everything, the authors implemented the original interior of the passenger compartment and a characteristic soundtrack, as well as brand wheels on low-profile rubber were added.

Dear site user, for cargo transportation by passenger car, do not forget to download and install the mod Passenger trailer for all ETS 2 simulator versions!
Nissan cars
Previous modNext mod