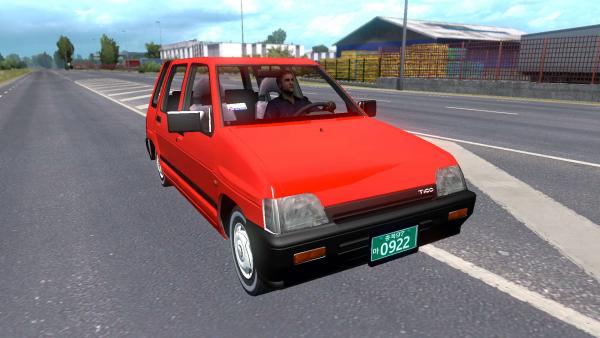 Small-sized city passenger car Daewoo Tico was produced by the South Korean company Daewoo in the period from 1991 to 2004 at car factories located in Poland and Romania. And in 1996, production was established in Uzbekistan at the automobile plant Uz Daewoo Auto, where the car was produced until 2004. The subcompact is comparable in class to the vintage Renault 12.

Daewoo tico passenger car mod for Euro Truck Simulator 2 is equipped with standard suspension, 170 horsepower engine and six-speed gearbox. The authors of the mod reconstructed the classic original interior of the cabin with a working animation of the dashboard. Unfortunately, the car has no tuning, which often upsets players simulator ETS 2, but the virtual car is complemented by branded wheels and genuine Korean registration numbers, and the body can be painted in any custom color.

Dear site user, for cargo transportation by passenger car, do not forget to download and install the mod Passenger trailer for all ETS 2 simulator versions!
cars Daewoo
Previous modNext mod

The Dacia Sandero car, produced by a Renault subsidiary in Romania for the Eastern European market, will now plow the virtual road expanses of the simulator. The car is equipped with one and a half...

New in 2018, the compact urban crossover Skoda Karoq appeared in the car dealerships of the simulator. At the moment, the equipment is very modest, the player is invited to choose the type of...