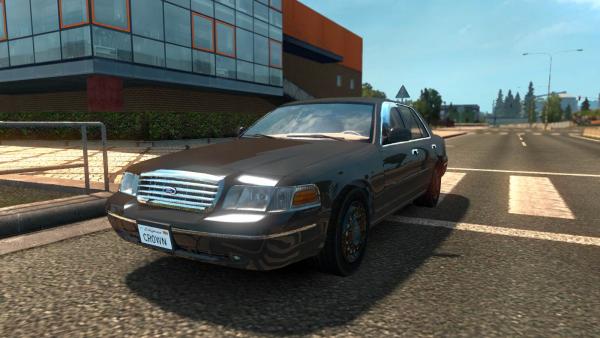 A classic American car Ford Crown Victoria, in a sedan-type bodywork on a frame structure, the first copy of which came off the assembly line of the automotive giant Ford in 1991. The production of passenger cars continued for twenty years, until 2011.

The mod of the Ford Crown Victoria passenger car for Euro Truck Simulator 2 is not inferior in its realistic appearance to the elite BMW 5-Series E39. The authors of the modification managed to realize the original interior of the cabin and prescribe a full-fledged animation. Properly recreated behavior and control, as well as a characteristic soundtrack, adds realism to the virtual roads of the ETS 2 simulator. Of the power units, the car is equipped with a 200 horsepower engine and a four-speed gearbox. Special attention is also paid to branded wheels on stamped disks.

The Ford Transit Connect commercial vehicle mod will be a nice addition to the ETS 2 simulator. The high-quality three-dimensional model of the body provides the vehicle with photographic accuracy...

The mod of one of the most popular cars in Europe, Russia and the republics of the former USSR, the Ford Focus, is made in high quality. The authors have implemented the original interior of the...