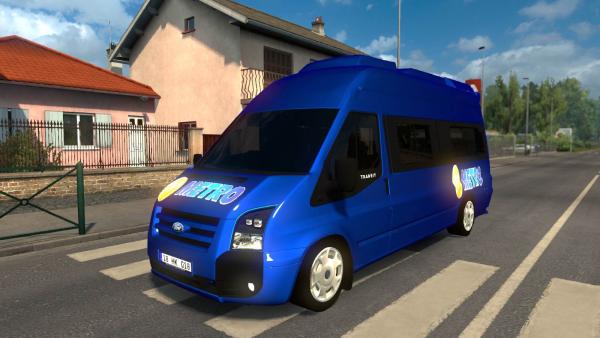 Surely each of us is familiar with the Ford Transit car, which has been manufactured since 1953. Along with Mercedes-Benz Sprinter, cars of this brand are widely used as minibuses for transporting passengers on urban and suburban routes, as well as in the modification of the van for the delivery of small consignments.

The mod of the car Ford Transit, the seventh generation, model 2010, for Euro Truck Simulator 2 is pretty good. The authors realized the possibility of changing the appearance, with the help of the attached set of spare parts, the ETS 2 sim player can easily replace bumpers, headlights, radiator grills. When buying at a car dealership, any complete set of a van or minibus with a choice of suspension, engines with a capacity of 150 and 170 horsepower and six speed gearboxes will be offered. In addition to all of the above, the virtual Ford Transit has an original interior with prescribed animation of instruments, switches, buttons and indicators.