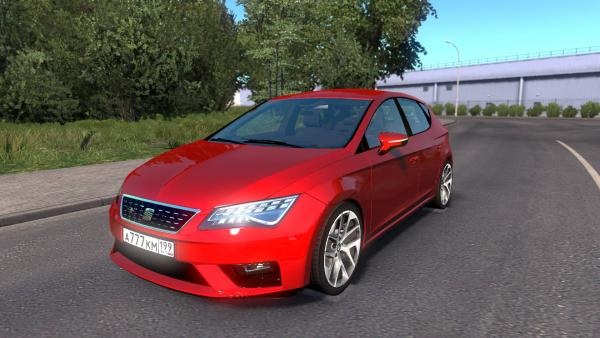 Small-sized passenger car SEAT Leon III belongs to the third generation of passenger cars of the Leon series, produced since 2013 by the Spanish company SEAT. The car body has the type of a five-door hatchback.

The mod of the passenger car SEAT Leon III for Euro Truck Simulator 2 has a photographic resemblance to a real prototype, thanks to a highly detailed three-dimensional model. The developers realized the original interior of the cabin with full animation, for the players of the ETS 2 simulator a pair of engines with a capacity of 160 and 170 horsepower and a six-speed gearbox were prepared. In addition, two sets of branded discs are available, and the presence of a virtual towbar adds the possibility of cargo transportation using a light trailer.

And for fans of Russian maps, there is an alternative to installing the Russian license plate, which can be downloaded at this link. It is important to know that the file of the registration plate must be above the main mode!

Dear site user, for cargo transportation by passenger car, do not forget to download and install the mod Passenger trailer for all ETS 2 simulator versions!
cars SEAT
Previous modNext mod

The mod of the rally car Hyundai i20 WRC will perfectly fit into the game world of Euro Truck Simulator 2, thanks to the detailed three-dimensional body model and its branded sports paintwork. On the...

The game world of Euro Truck Simulator 2 has replenished with the new Opel Astra J passenger car, made in high quality. When creating the mod, a detailed three-dimensional model was used, thanks to...