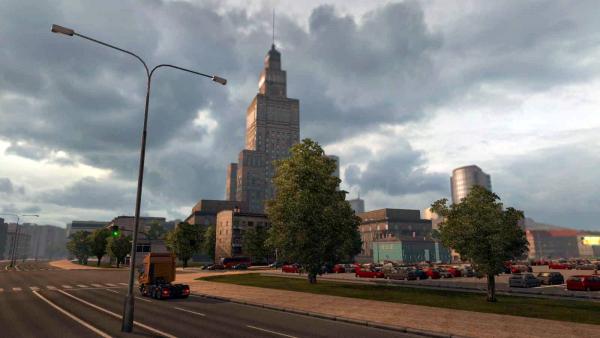 One of the most popular copyright locations for the ETS 2 simulator, a large-scale map of Orient Express, includes three CIS countries: Ukraine, Russia and Belarus. The project began to be created by the authors several years ago, for all the time developers developed several versions of the modification, and with each subsequent addition they added new routes and cities. The mod is unique and works great with other modifications, for example, with the Frosty Winter mod, the player can feel all the charm of the cold season.

In our case, wing East and Viva la France must be activated, and when activated in the list of modifications you need set files backward priority!

In the new version of the mod 10e have the Orient Express mod for Euro Truck Simulator 2 in two versions, 9.0 and 10.7 for the currently relevant editions of ETS 2. A virtual trucker enters new territories through checkpoints located on the Polish border. During the trip, the driver will see many interesting and original areas with their characteristic pavement, roadside infrastructure, buildings, interchanges, markings and road signs. As you follow the driver, you will encounter serious accidents with a crowd of onlookers and special services vehicles, forest fires, and police detention of criminals. At traffic police posts, police officers are constantly on duty, stopping vehicles to check documents, and passengers who are waiting for the bus are standing at stops. The authors tried to realize the peculiarities of countries, for example, on the territory of Belarus, the road runs past the BelAZ automobile plant, where several new powerful trucks stand behind the fence. Carefully crafted villages with herds of cows, repair work and the construction of new roads, working loading logs for timber trucks, mobile gas stations and much more add a special flavor to the area. In each city, the player will discover unusual specific transport companies, recruitment agencies, service stations and car dealerships. The Orient Express mod will add a lot of new impressions and will add a special interest to the simulator, but be sure to know that in order to work correctly in Euro Truck Simulator 2 DLC Scandinavia, Go.9, the authors corrected previously identified errors, carried out improvements and significantly increased the map area. A large territory has been implemented from Irkutsk to Chita with small cities and towns, a network of highways, roads and traffic intersections. In total, the location contains 254 settlements and thousands of kilometers of roads.

In the freshest actual version of Vostochny Express mod 10.10, the authors implemented a new route leading from Chita in the east direction, along which new cities and towns were built, including Novotroitsk, Solovievsk, Chernyshevsk, Zhireken and many other settlements, as a result, the number of them on the whole map increased to 263. In addition, previously identified errors were corrected.

A fix combining a EE 10.7 map with Italia DLC on simulator versions 1.28 and 1.30 can be download here. The manager is placed above the Orient Express files!

In the Orient Express version 11.1, a new section of the Khabarovsk-Komsomolsk-on-Amur map was built, the green light at traffic lights and other errors were fixed.

Dear user of the site, carrying out the transportation of goods across the expanses of Russian maps, to enhance the effect of realism, we recommend you to download and install the mod Russian radio stations for all versions of the simulator ETS 2!
new maps russian map
Previous modNext mod