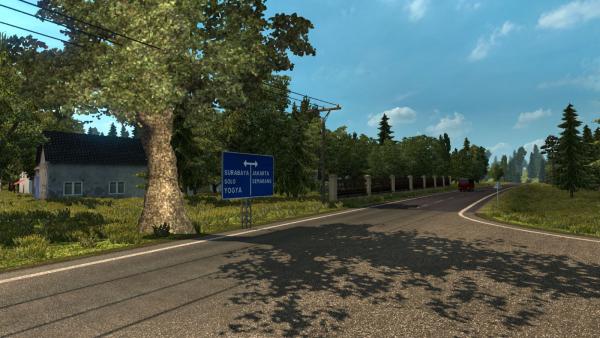 Surely many players of the simulator are tired of the boring and monotonous world of European roads ETS 2, it's time to take a car trip to a paradise on earth, that is, to visit the wonderful world of the exotic state of Indonesia. Since the country has left-hand traffic, for the convenience of driving on local roads, it will be necessary to convert our truck to a right-hand drive, or buy a Laksana Legacy Sky SR2 bus, whose steering wheel is initially located on the right. To get to the new location, the trucker will have to cross France, and before his eyes a new flavor of the world will appear.

The Indonesia map mod for Euro Truck Simulator 2 abounds mainly in rural landscapes. Peculiar cities with their own unique flavor will be replaced by shady groves located in the far mountains, and the characteristic traffic will allow the player to plunge headlong into a new addition. The road will not be boring, because during the trip, the eyes of the driver will see roadside bazaars, groups of people waiting on the side of the road, inaccurately parked cars to drive around, you will have to apply maximum skill, broken roads in the trash and much more Well, of course, it should be noted special traffic: mopeds drive on the roads, old cars, including Soviet-made ones, and some other, exotic for an ordinary European, transport.

A comfortable Laksana Legacy Sky SR2 intercity bus manufactured in Indonesia, of a right-hand drive configuration, has its own sounds, two types of engines and twelve gearboxes, original skin...

The map of the state of Indonesia impresses with its beauty of landscapes, rainforests, mountain ranges, clean lakes. When traveling along the clean, even roads of the country, cities with their own...