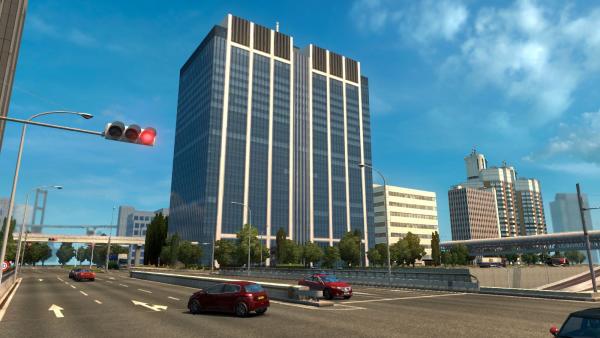 The new small standalone map of Tokyo, originally named TokyoBayshore, adds a multi-million dollar metropolis, the capital of the country of the rising sun, to Euro Truck Simulator 2. The map itself is not as huge as, for example, the mod maps of China and the islands of Taiwan, but almost all the heart of the main city of Japan is concentrated in it. From the first seconds of the game, the virtual driver of the ETS 2 simulator will see huge skyscrapers, multi-level transport interchanges, tunnels, bridges and a kind of infrastructure. During the trip, the trucker will have to deal with not very convenient left-hand traffic, however, the original traffic, Japanese registration numbers and the surrounding color will plunge into the pleasant enchanting world of the east.

For the add-on to work correctly, the following DLCs should be installed in the game: Scandinavia and Going East, then create a new profile and select a map with the file name: wangan.mbd.

In the latest version (augmented), Kawasaki attractions were added and bugs were fixed, and a new realistic traffic was implemented for 1.33 - 1.37. For the mod to work, you must connect the DLC Going East, Scandinavia and Vive la France!

Dear user of the site, carrying out the transportation of goods across the expanses of Russian maps, to enhance the effect of realism, we recommend you to download and install the mod Russian radio stations for all versions of the simulator ETS 2!
new maps Tokyo
Previous modNext mod

The new mod of the map of Japan, with the original name Project Japan, will immerse the player of the ETS 2 simulator in the amazing game world of the Eastern island state. At the time of release,...