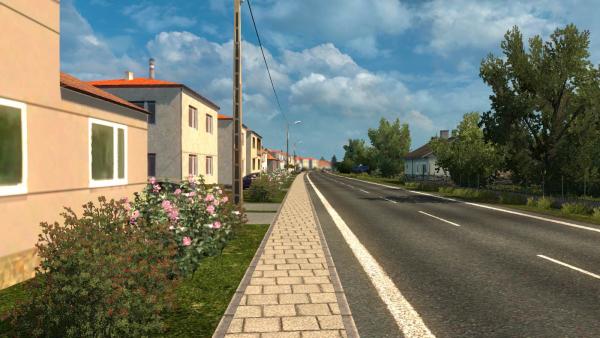 The Czech Republic, located in the very center of Europe, has long been famous for its signature beer and historical sights. Surely many fans of the ETS 2 simulator would love to visit this wonderful state, and now, thanks to the authors of the modification, there is an opportunity to shake the virtual version of the country along the roads.

The Czech map mod with the original name Majooou Map for Euro Truck Simulator 2 recreates the game world of the European Republic on a 1:1 scale, that is, the developers almost completely embodied the whole country in the game in real size. At the time of release, the location has 32 settlements, united by a developed road network. The territory is replete with its own buildings, original road signs and structures, as well as new transport companies.

The modification does not add the Czech map to the standard location, as, for example, MHAPro Map EU, but it is autonomous, so the player needs to create a profile, select the game module in the file manager: MajooouMap1.mbd and start a new game.

You need to know that for the add-on to work in the simulator, the following DLCs must be installed: Going East, Scandinavia and Vive la France!

Dear user of the site, carrying out the transportation of goods across the expanses of Russian maps, to enhance the effect of realism, we recommend you to download and install the mod Russian radio stations for all versions of the simulator ETS 2!
Czech Republic new maps
Previous modNext mod

The fictional state - the Republic of Aloma totals about thirty large settlements and cities located on a vast territory. Settlements are united by an extensive network of highways, both highways,...