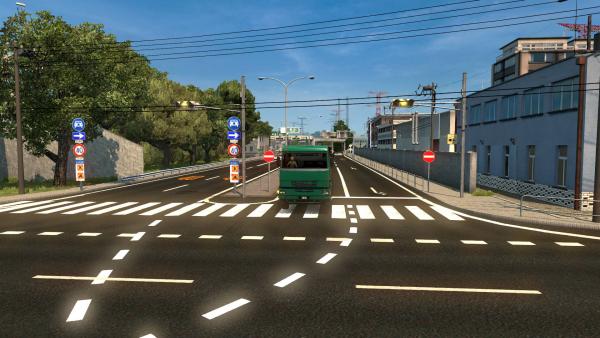 A very interesting addition, called Project Japan, is designed to implement in the game world of the ETS 2 simulator the territory of all of Japan in a 1:19 scale. At present, the authors have recreated three cities: Toyama, Kanazawa and Takayama with small villages connected by a road network and ferry crossings.

Mod maps of Japan - Project Japan for Euro Truck Simulator 2 with realistic accuracy repeats the whole flavor of this island nation. This is a beautiful terrain, and an architectural feature, and high-tech enterprises that we could already meet on the map of Tokyo, and high-quality road surface, and marking with signs, and exotic vegetation, and much more.

Since the map mod of Japan is autonomous, you need to create a profile, select the game module japan.mbd, (instead of Europe) and start a new game! It is important to know that for the modification to function, the game must have the following installed: DLC Going East, Scandinavia, France, Italia and Baltic DLC!

When activating the add-on, the following sequence must be observed in the file manager:

If desired, to enhance realism, you can activate files from the ADD-ON_MOD folder, which add various trailers to the purchase and to direct orders.

Dear user of the site, carrying out the transportation of goods across the expanses of Russian maps, to enhance the effect of realism, we recommend you to download and install the mod Russian radio stations for all versions of the simulator ETS 2!
new maps Tokyo Japan
Previous modNext mod

A small standalone map that adds to the game the capital of Japan, Tokyo. The player is waiting for a huge metropolis with skyscrapers, multi-level traffic intersections, tunnels, bridges, road...