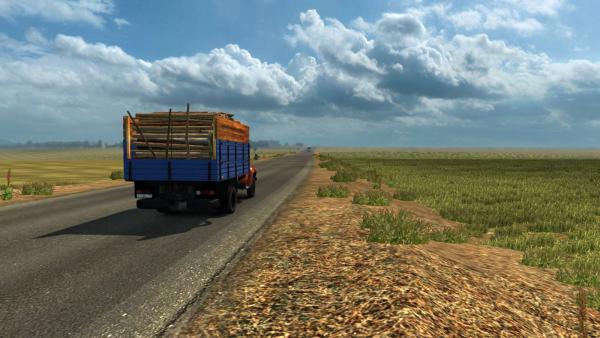 Kazakhstan, one of the largest countries in Eurasia, with an area of more than 2.7 million square kilometers and a population of about 18.2 million people. For older versions of the ETS 2 simulator, the author of 09_KZ already made an attempt to implement the location of this former Soviet republic, but the developer did not stop there, and made another leap in modostreniye creating a special, kind, map that includes the southern part of the Saratov region and several regions of northern Kazakhstan.

Mod map Great Steppe - Kazakhstan for Euro Truck Simulator 2 is quite unique, as it supports the functionality of both an autonomous map and is combined with similar authoring additional locations. The modification is perfectly combined with the Russian map - RusMap, and is, as it were, a continuation, you can get to new territories along the highway passing through the city of Engels, where a new, previously unknown, terrain will open along the routes for the driver. At the moment, several cities are available, united by roads, a checkpoint on the border, villages and a lot of characteristic buildings. The player will conquer the colorful world of the steppe country, breathing a kind of original color, flora and fauna.

In the latest version of mod 1.2 for ETS 2 1.31 and 1.32, the authors implemented new roads and settlements, as well as corrected all previously identified errors.

In addition, you can download city name Russifier to correctly display the names of settlements, in the file manager you must place it above the files of the main mod!

You should know that for the full functionality of the mod, you need to place the add-on files at the very bottom of the list of modifications.

For the correct operation of version 1.0.3, you must have DLC Going East, Scandinavia and Vive la France in the game!

Dear user of the site, carrying out the transportation of goods across the expanses of Russian maps, to enhance the effect of realism, we recommend you to download and install the mod Russian radio stations for all versions of the simulator ETS 2!
Russian map Kazakhstan
Previous modNext mod

The mod of the autonomous map of the Novosibirsk region with the original name NSK-Map immerses Euro Truck Simulator 2 players in the atmosphere of Russian Siberia. The new location is made at a...

The fictional state - the Republic of Aloma totals about thirty large settlements and cities located on a vast territory. Settlements are united by an extensive network of highways, both highways,...