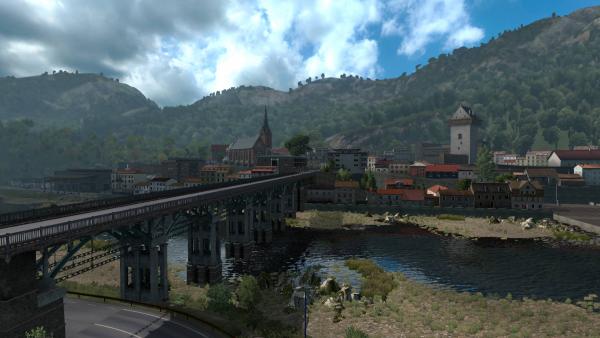 For the ETS 2 simulator, by the works of the authors of the modifications, to date, a large number of add-ons have been created that implement in the game both really existing states and fictional regions. The new map of Grand Utopia is just an invented island.

The Grand Utopia map mod for Euro Truck Simulator 2 implements an island state in the game world, reminiscent of the central regions of France in color. The authors recreated a vast territory in the virtual world with more than 30 settlements united by a developed network of roads. The color of the region impresses with the picturesque location of the countryside, similar in beauty to the map of Eldorado. Settlements abound in specific buildings, and in large cities, modern buildings made of glass and concrete with Gothic architecture are successfully combined. In addition, there are 85 transport companies for cargo transportation, as well as gas stations, workshops, car dealerships and other necessary facilities.

Since the map is stand-alone, you need to create a profile for the game, select the game module grandutopia.mbd in the file manager and start a new game. You need to know that the mod must have DLC: Going East, Scandinavia, Vive la France, Italia, Baltic Sea.