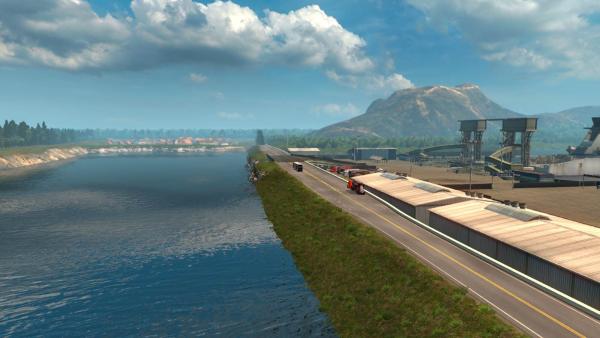 The Republic of Aloma is a fictional state, invented by a group of developers of add-ons for the ETS 2 simulator. With its special flavor of the area, the new location can compete with such exotic maps as Amazonas or Bangladesh.

The mod of the map of the Republic of Aloma with the original name Republic of Aloma for Euro Truck Simulator 2 has about thirty large towns and small cities located on a vast territory. All settlements are connected with themselves by a large network of highways, both highways and unpaved ones not marked on the radar, which makes exploring new territories much more interesting. The modification boasts rewritten traffic characteristics, its own models of buildings, infrastructure and terrain.

For the functioning of the modification, the presence of the DLC in the game is required: Viva la France, Heavy Cargo Pack, Metallics, Metallics2, and Oversize. The new map is autonomous, so before starting it is necessary to create a profile, select the game module: n.mbd and start a new game. When connecting parts, be sure to observe the priority, top A1 ..... A4 bottom.

In new, current versions of the mod, starting from 2.4 for ETS 2 1.33, 1.34 and 1.35, to the north of the main map, a territory using the Beyond the Baltic Sea DLC has been added, so the presence of this DLC for this version is necessary for work!