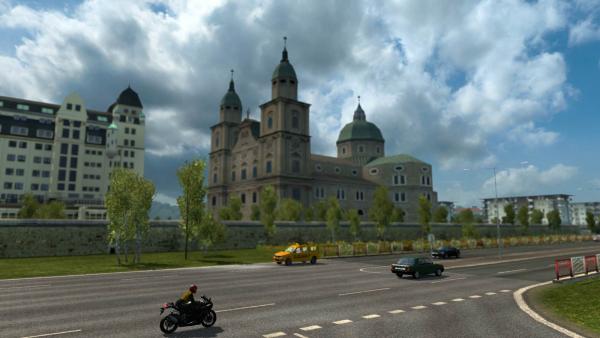 Romania, a fast-growing economy, is located in Eastern Europe and has a population of about 20 million people. Until the end of the eighties of the last century, the country was part of the zone of the Socialist camp.

The mod map of Romania with the original name Romania Extended, for Euro Truck Simulator 2 appeared thanks to the efforts of the author Arayas, he managed to implement not only Romania itself, consisting of 44 settlements united by an extended road network, but also several border areas of Bulgaria, Serbia, Ukraine and Moldova. The new locations contain their own characteristic for the area models of buildings, signs and road infrastructure. I especially want to note the original traffic, which is not so common in such mods for the ETS 2 simulator.

The developer was able to realize the full compatibility of the modification to other copyright maps, such as the Russian map, the Southern Region, the Great Steppe, the Map of Turkey from YKS and others. And for connecting by road and ferry maps of Romania version 1.8 with maps of the Southern Region 7.2.0, Turkey from YKS and TruckSim 6.6.2, special fixes were developed that can be download here.

You need to know that for the mod to work, you must install the game: DLC Going East, Scandinavia, Vive La France and Italia DLC.

Dear user of the site, carrying out the transportation of goods across the expanses of Russian maps, to enhance the effect of realism, we recommend you to download and install the mod Russian radio stations for all versions of the simulator ETS 2!
Romania new maps
Previous modNext mod