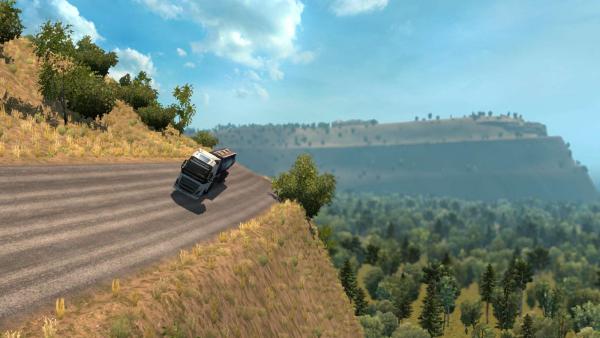 In the standard version of the ETS 2 simulator there are not so many difficult tracks, for some reason, the developers of the game did not take care of extreme drivers without realizing difficult roads. Thanks to the efforts of the authors of additional maps, virtual truckers have the opportunity to realize themselves as aces of heavy truck drivers.

The deadly route map mod for Euro Truck Simulator 2 adds a new impassable terrain to the standard location, which is much more difficult than dangerous routes in terms of travel difficulty. A turn to the new territory can be found east of Venice and west of Nice. The road passes along the mountain slopes, woodland, through small cities and towns. Along the route there will be mountain collapses, repair work, which you will need to take special care to avoid, to avoid falling off a cliff, and in residential areas to monitor people crossing the road so as not to bring them down. It is especially worth monitoring the speed limit so as not to fly off the track, as some unpaved and asphalt roads have a horizontal slope. The mod is intended primarily for those who are not looking for easy ways and want to tickle their nerves.

You should be aware that the add-on only works after creating a new profile and selecting a module: eurohondu.mbd, as well as the DLC Scandinavia and Vive la France must be installed in the simulator!