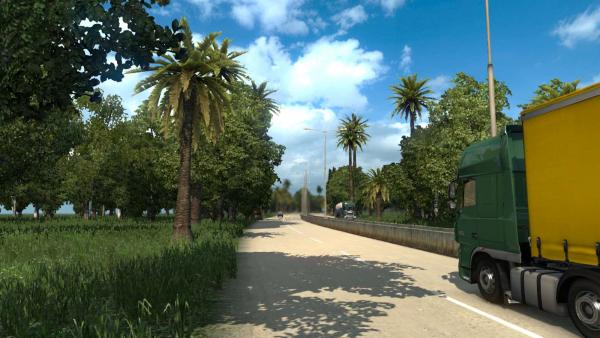 Very unusual and interesting mod of the new map, which includes several climatic zones. A virtual trucker, wandering along the long road routes of the ETS 2 simulator, will find it rather unusual after hot tropics to find himself in a snowy area where you have to fight with difficult road conditions, or in a vast, sun-drenched, impassable desert, where you will need to focus on passing vehicles, which not to get out of the way. Difficult mountain narrow roads add to the difficulties, on which it is extremely difficult to miss the oncoming stream, otherwise, as well as in the modification of the death routes of an inexperienced driver, a rollover awaits.

The authors of the BD Creative Zone map for Euro Truck Simulator 2 in one mod managed to realize the endless Arabian deserts, and the natural features of the northern latitudes, and the complexity of mountain alpine roads, and the wooded area of the European mainland, and the tropics of Asian countries.

The map is autonomous, so in order to master new territories, you need to connect the files in the manager in the correct sequence and start a new game. In case of problems with the launch, the archive has a ready-made player profile.