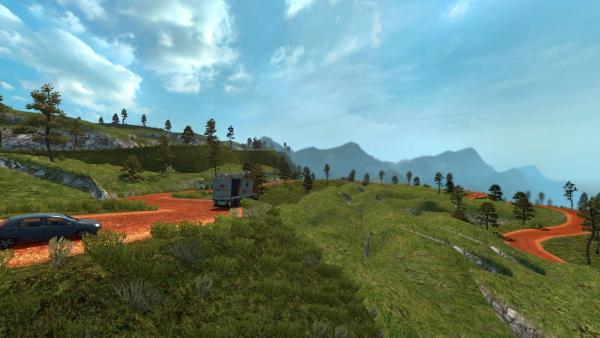 Trucker work is far from the easiest profession, and sometimes quite dangerous. We propose to make sure of this with the new map mod dangerous routes, where the player will plunge into the world of difficult mountain roads and passes. In terms of size, the new location of the ETS 2 simulator is not much inferior to the map of Peru, where quite complicated paths are also laid.

In the mod of dangerous routes for Euro Truck Simulator 2, the virtual driver has to overcome many difficult tasks, where he will have to apply all his skill in managing heavy vehicles. The tracks run through the mountains, where the road surface is mainly gravel; smooth tracks in the valleys are relaxing in simplicity, replaced by a mountainous serpentine, where it will be very difficult for a virtual trucker to drive a truck so that it does not fly off a slope. In addition, the authors registered their own weather effects, based on the flight height, original vegetation and buildings. The supplement includes fifteen cities, interconnected by roads. The map is autonomous, so the player needs to create a new profile and select the location of Rutas Mortales.mbd.

The latest current map version 1.0 for ETS 2 1.33, 1.34 and 1.35 was re-built while maintaining the basic principles, the mod includes 5 cities and complex road routes, there is support for the current patch, DLC is not required. You need to start a new game and select a game module: Rutas Mortaless.