обновите на 1.40...
WE IN VK
SUBSCRIBE
Mods for ETS 2 simulator / Maps / Map of the Republic of Tajikistan

Mod Map of the Republic of Tajikistan for ETS 2 v.1.35 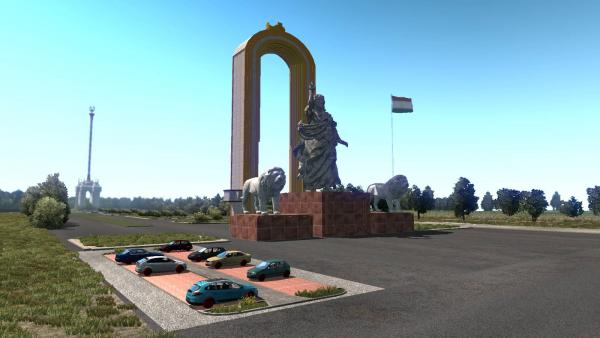 Tajikistan, one of the poorest republics of the former USSR. The common border with Afghanistan has led to the fact that the state is the main route for drug trafficking to European countries, due to which crime and corruption are growing in the country. However, due to the unique nature and ancient monuments of architecture, the state is very popular among tourists.

The mod of the map of the Republic of Tajikistan for Euro Truck Simulator 2 is made on a 1:1 scale, in accordance with the cartographic schemes of Google and Yandex. The authors tried to recreate the whole atmosphere of the Central Asian state by realizing in the game world of the ETS 2 simulator a complete picture of the exotic nature, mountainous terrain, characteristic buildings and roadside infrastructure.

The new mod, like the map of Iran, is autonomous, so before starting the game you need to create a profile, activate the modification in the file manager, select the tad.mbd game module and start a new game. You should know that for the work of the add-on you need: DLC Going East, Scandinavia, France, Italia and Baltic DLC!