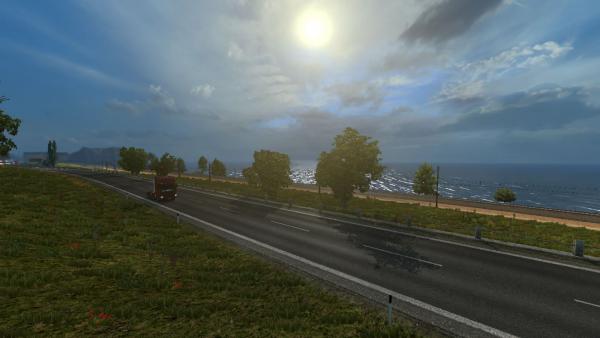 If you are an avid player in ETS 2, then you must have thought of traveling around Italy more than once. This magnificent state is located in the very center of the Mediterranean. But not so much the graphic arrangement as the unusual beauty of these places attracts travelers. And you can ask a logical question: is it possible to enjoy this beauty with the help of a high-quality map of Italy? We will try to figure it out!

Immediately, we note that the map has a somewhat alternative and, possibly, not the most truthful look at the Apennine island. But the work on developing the virtual world was really colossal. A whole network of roads, many panoramic landscape crossings, well-detailed cities, including even small villages, the presence of high-quality prefabs.

Does it make sense to enlarge the standard map with an addition? Yes, because in this case we get in Euro Truck Simulator 2 an almost completely completed small region of Northern Italy, which you might encounter in the case of a traditional map. The theme of the add-on is very similar to the mod, MHAPro Map EU, which also extends the capabilities of a standard map, expanding its functionality.

New versions of the mod are constantly appearing. At the time of the release of the full-fledged second version of the modification, several dozen villages, large-scale freeways running near the peninsula and a huge network of smaller roads were fully detailed. Of course, all related facilities are available!

A map can work with other map mods, but only if they do not apply to Italy!

Dear user of the site, carrying out the transportation of goods across the expanses of Russian maps, to enhance the effect of realism, we recommend you to download and install the mod Russian radio stations for all versions of the simulator ETS 2!
new maps Italy
Next mod

The new Antarctic map mod offers ETS 2 sim players to conquer the southernmost continent of the globe. You can get to the frosty mainland by ferry from the ports of Naples or Nynashamn. The authors...

The picturesque and colorful map of Eldorado greatly diversifies the gameplay of the ETS 2 simulator, as it is replete with interesting locations that are distinguished by their artistry and...

The map of the state of Indonesia impresses with its beauty of landscapes, rainforests, mountain ranges, clean lakes. When traveling along the clean, even roads of the country, cities with their own...