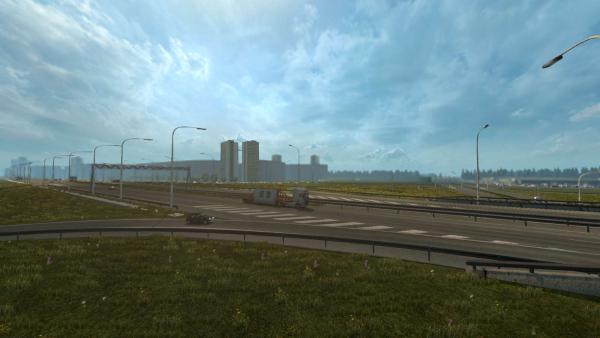 For many years, many mod developers have been engaged in the implementation of the ETS 2 simulator in two territories of Russia, Belarus and Ukraine. Such locations as the Russian map or the Russian open spaces have already been created and are being gradually developed, but a group of authors decided to embody three states of the former USSR in one update at once. At the moment, they have implemented thirty cities with suburbs, including: Gomel, Minsk, Mogilev, Khmelnitsky, Zhytomyr and some other settlements, united by a developed transport network.

The mod map Minsk-Moscow-Crimea for Euro Truck Simulator 2 is still under development, however, we are already given the opportunity to conquer new beta routes. The developers based on the original transport scheme of Google Maps, which can be seen by conducting a comparative analysis with geographical maps. The scale is reduced to 1:1, that is, to overcome the distance, a virtual trucker will need as much time as in real life. The player expects a realistic road surface with characteristic markings, signs and signs, roadside infrastructure and buildings typical of a particular area.

The modification is autonomous, therefore, to activate it, you need to start a new game, and in the file manager select the module: by.mbd. And don't forget to turn off the Viva La France DLC!

Dear user of the site, carrying out the transportation of goods across the expanses of Russian maps, to enhance the effect of realism, we recommend you to download and install the mod Russian radio stations for all versions of the simulator ETS 2!
new maps Russian map Crimea
Previous modNext mod

The new map of Siberia implements in the simulator the large Russian city of Omsk, combined with the suburbs by the road network. At the moment, the location does not differ on a large scale,...

The legendary representative of the Soviet automobile industry, the MAZ-6422M truck on a tractor chassis was created by the authors specifically for the simulator. The developers of the mod embodied...