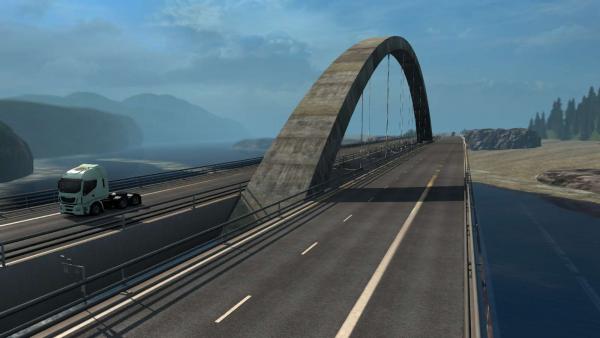 Canada, a country located in North America, occupying the second place in terms of area, but its population is only 34 million people, due to the fact that a large amount of territory due to cold climatic conditions is difficult for normal living of people.

The Canada map mod for Euro Truck Simulator 2 currently has a small size comparable to the borders with the modification of the Indonesia region, however, implemented cities with suburbs where you can find transport companies, service stations, garages and other infrastructure connected by a network of roads, already able to convey the characteristic atmosphere of the country. The virtual trucker of the ETS 2 simulator can get to a new location using the ferry service. The modification is universal, so the player does not need to restart the game, just in the profile you need to connect the corresponding files with scs permission.

However, you need to know that for the mod to work, you must have DLC Going East and Scandinavia in the game, and for version 0.1.7 and newer, also DLC Vive la France, Italia and Baltic DLC.

The new Antarctic map mod offers ETS 2 sim players to conquer the southernmost continent of the globe. You can get to the frosty mainland by ferry from the ports of Naples or Nynashamn. The authors...