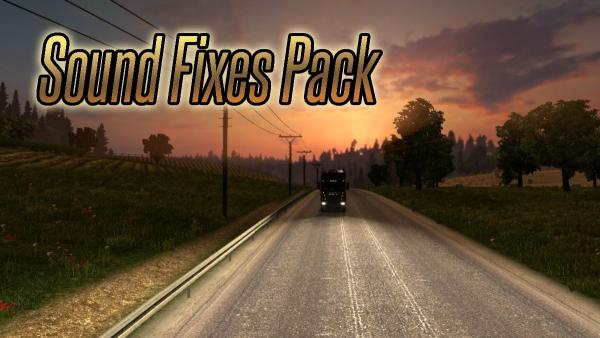 Sound Fixes Pack, these are high-quality sounds that perfectly suit the atmosphere of the ETS 2 simulator, which are waiting for you in this add-on. The advantage of the new soundtrack is their realism. It is evident that the authors, when developing the mod, managed to achieve the perfect balance in the combination of quality and realism. Now in a completely new way perceived in Euro Truck Simulator 2 switching levers, wiper, turn signals. Even the banal pressing of buttons seems unusual.

There is a completely different sound from the tires, it is different depending on the road surface. But most importantly, the sound changes not only from a change in the road surface, but also from a change in speed. The higher the speed, the louder the sound, and not only in standard gaming locations, but even on authoring modifications of additional countries, for example, maps of Italy.

Also, you will come across new sounds at gas stations, in workshops, at the entrance to the garage. That is, the soundtrack has changed even in the case of the environment.

Dear site user, whatever new mod you have installed in your game, do not forget to experience the quality of New trucks on the roads of the simulator ETS 2!
sounds realism
Previous modNext mod

The new Truck Test Area map mod adds to the gaming world of the ETS 2 simulator a test site located in Germany, south of Magdeburg. On the site there are a couple of slides under a different slope,...

The Alive Traffic add-on adds more realism to the game. Now, the behavior of drivers is becoming more diverse, inexperienced people move at a low speed at the far right lane, majors in sports cars...