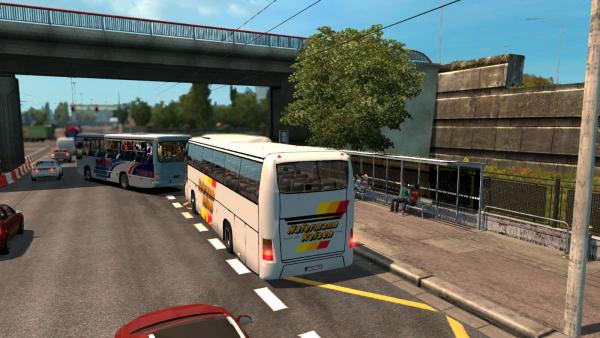 The maximum realism of the game world, here is one of the main points of developers of modifications to the ETS 2 simulator. Until today, virtual truckers from the windows of their trucks have been able to watch buses aiming on the roads. Unfortunately, the creators of the game did not attach any role to this type of passenger transport. Now, with the new addition, you can and they can find a worthy application.

The Parking bus mod for Euro Truck Simulator 2 prescribes the behavior of buses for a new purpose, that is, they will make planned stops for boarding passengers at public transport stops, not only regular ones, but also added to traffic, for example, from the bus pack mod from Jazzycat . People with their own animation will appear in the stop pavilions, waiting for their route. The originality of the modification lies in the fact that the add-on works not only in the standard European location, but also on additional author maps, on which there are stop prefabs.

Dear site user, whatever new mod you have installed in your game, do not forget to experience the quality of New trucks on the roads of the simulator ETS 2!
traffic realism bus
Previous modNext mod

The new mod adds a Scania R500 truck with a fuel tank to Euro Truck Simulator 2. The tractor is completely independent, has the original body kit and skin of the transport company C&M Transport,...

Continuation of the popular modification from the author Jazzycat, implementing in the game world Euro Truck Simulator 2 road trains with logos of famous companies applied to trailers and cabs of...

The Bus Terminal mod will be interesting, first of all, to those fans of the ETS 2 simulator who love unusual and exciting routes. Indeed, with the new addition, the virtual driver will have to carry...