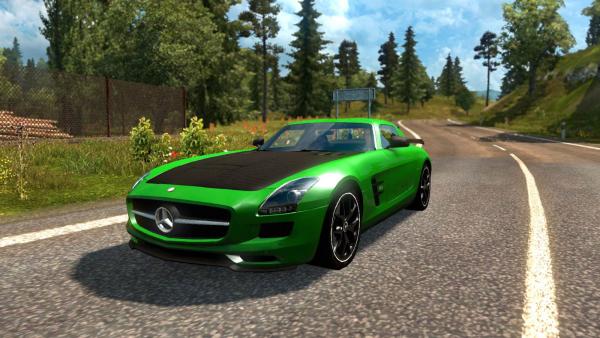 The game world of the ETS 2 simulator cannot boast of a variety of vehicles in traffic, but thanks to the author's modifications, motorcyclists, classic cars, tuned cars, and even a rickshaw appeared on the virtual roads of Europe.

The mod of sports cars in traffic with the original name Sport Cars Traffic Pack for Euro Truck Simulator 2 adds driving on the roads of elite high-speed cars of famous automobile brands such as Aston Martin, Bugatti, Mazzanti and the like. All cars are well optimized, made using detailed three-dimensional models with high-resolution textures.

With the release of each new version of the mod, the number of cars in traffic increases significantly. In the latest, current version 8.1, their number has increased to 206 cars.

In the archive of version 4.7 - 8.1, in addition to the mod itself, there is also a fix for compatibility with mods by Jazzycats, in the Addon folder additionally realistic sounds for each model by Cipinho (connect with priority).

In addition, you can additionally set your own sounds for each car, it works only on game versions 1.35 and 1.36, you must respect the priority when connecting!

Dear user of the site, choosing your favorite number and variety of vehicles on the road, we recommend you to download and install additional map for your version of the simulator ETS 2!
traffic cars
Previous modNext mod