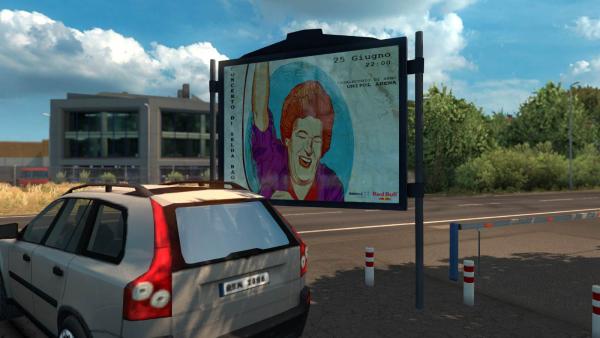 A new interesting mod - Real Advertisements is aimed, first of all, to increase realism in the game world of Euro Truck Simulator 2, as it replaces standard billboard posters with posters of real brands. As a result, after installing the add-on, on all billboards of the main locations of the ETS 2 simulator there will be a realistic advertisement of well-known manufacturers of drinks, animal feed, perfumes, fast food restaurants, transport companies and some other eminent enterprises.

The total number of replaced advertisements exceeds 200, which positively affects the updated gameplay.

Dear site user, whatever new mod you have installed in your game, do not forget to experience the quality of New trucks on the roads of the simulator ETS 2!
realism advertising
Previous modNext mod

The new Real Trailer Tires Mod adds to Euro Truck Simulator 2 the ability to install realistic tires of almost all sizes and types from reputable manufacturers on purchased trailers. All tires have a...

What inspired the authors to create such a global mod remains a mystery. But it can be assumed that he was bored with the monotonous fictional logos visible from the truck window. The mod really...