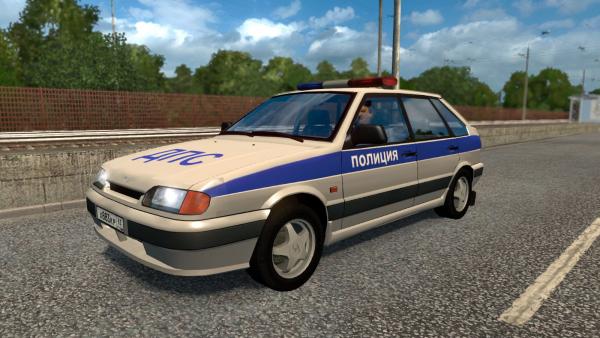 The new mod extends the capabilities of Euro Truck Simulator 2 by adding two Russian cars VAZ-2114 and VAZ-2170 to the road patrol service. Officers traffic police will drive along the roads of Russia and Belarus, monitoring the observance by the virtual driver of the rules of the road, in violation of which a fine will be imposed immediately.

Since the two union states were ignored by the developers, in order to implement the modification in the ETS 2 simulator, it is necessary to install an additional map, for example RusMap, where the above countries are present with a rather large length of roads and the number of cities.

Dear user of the site, choosing your favorite number and variety of vehicles on the road, we recommend you to download and install additional map for your version of the simulator ETS 2!
Traffic police traffic
Previous modNext mod

With the mod of random events in the game world of Euro Truck Simulator 2, new scenes of traffic accidents are added. The developers of the add-on have been tuned in the frequency of their appearance...

It's time to diversify and improve the game world, adding a little more realism to it. As we know, the developers of the game did not realize the exit of smoke from the exhaust pipe. But thanks to...