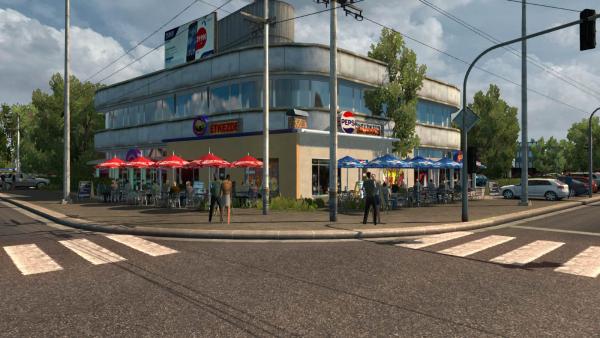 Hungary, a state located in Eastern Europe, like Romania, until the end of the eighties of the last century was part of the zone of the Socialist camp. The country is characterized by a peculiar culture, architecture, atmosphere and customs.

The Hungary map mod for Euro Truck Simulator 2 is quite large-scale, by the time the latest version of the modification was released, the author was able to implement 70 large settlements with a rich life simulation. In big cities and towns, life is in full swing, vehicles are parked on the roads, pedestrians walk in the streets, and people relax in street cafes. A large, ramified network of roads was built that conveys the true atmosphere of the road economy, in other places the roadway is so narrow that two cars can hardly drive off, in these areas the virtual trucker will have to use all his skills to prevent a traffic accident.

The new mod for the ETS 2 simulator will allow the player to plunge into the world of the European state, admire, albeit virtual, the beauties of ancient buildings, make freight for classic transport companies and hone their driving skills on difficult road sections.

It is important to know that the map of Hungary is autonomous, and to start the mod you need to create a profile, select and activate in the file manager: hungary.mbd; and start a new game.

Dear user of the site, carrying out the transportation of goods across the expanses of Russian maps, to enhance the effect of realism, we recommend you to download and install the mod Russian radio stations for all versions of the simulator ETS 2!
new maps Hungary
Previous modNext mod