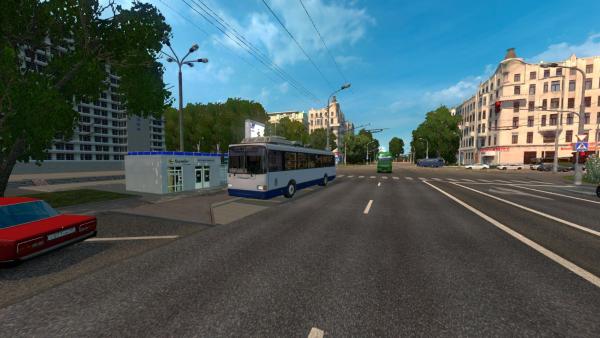 A fairly large-scale map of the southern region of Russia includes a fairly vast area. The addition was made using high-quality models and high-resolution textures, which allowed to convey the originality of the Russian edge of the country as much as possible. The modification is fully compatible with the Russian map mod, as the developers develop, they expanded the location by adding new territories, roads, cities and towns. The virtual drivers of the ETS 2 simulator will have to visit a considerable number of really existing villages, villages and cities, where they will encounter not quite familiar transport, trams and trolleybuses.

In the Southern Region mod for Euro Truck Simulator 2, there are such famous settlements as Nevinnomyssk, Rostov, the village of Kanevskaya and others. Truckers will have the opportunity to drive along the following routes: M-4 Don, R-268, R-251. Agricultural machinery is found on rural roads, combines are working in the fields, road infrastructure fully conveys the flavor of the southern Russian macro-region.

For proper operation, the presence of the following DLCs is required: Scandinavia, Going East and Vive La France, and when used simultaneously with RusMap, the Russian map should be placed higher in the list of modifications.

In addition, for the mod to work on some versions of the mod and ETS 2, be sure to read and download the necessary fixes and patches necessary for your version of the simulator!

Dear user of the site, carrying out the transportation of goods across the expanses of Russian maps, to enhance the effect of realism, we recommend you to download and install the mod Russian radio stations for all versions of the simulator ETS 2!
new maps Russian map
Previous modNext mod