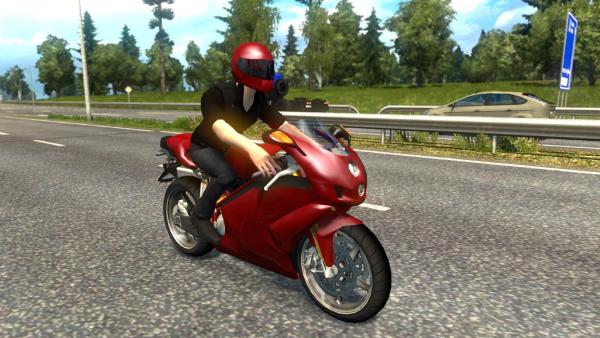 Spending a considerable number of hours playing the game in Euro Truck Simulator 2, each virtual driver without any doubt noticed that the developers of the game world did not take care of such road users as motorcyclists. Agree that without them, the roads of the ETS 2 simulator look somehow inferior, but thanks to the author’s mod of the Moto traffic pack, this flaw was eliminated.

The add-on is universal and works with other mods of additional traffic. After the installation of the modification, two-wheeled vehicles in the amount of 68 copies will appear on standard routes and roads of author's maps. Motorcyclists, like motorcycles themselves, are made using high-quality three-dimensional detailed models.

The add-on that adds realistic sounds for each motorcycle included in Pak moto traffic by Jazzycat is suitable for ETS2 1.31 - 1.36 can be download here. Important! When connecting, you must set the file to the highest priority!

Dear user of the site, choosing your favorite number and variety of vehicles on the road, we recommend you to download and install additional map for your version of the simulator ETS 2!
traffic motorcycles pack
Previous modNext mod