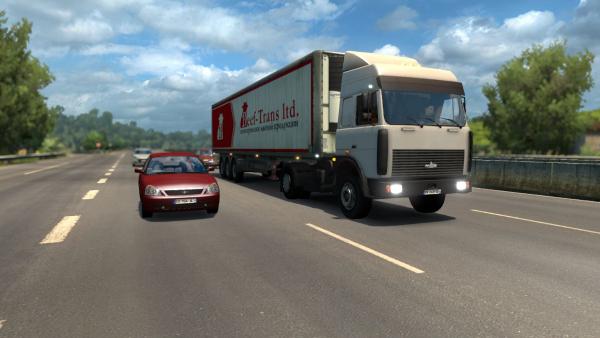 The new mod complements the standard traffic with cars, trucks, motorcycles and buses of Russian and Soviet production, in the latest version their number increased to 102 pieces. The authors have corrected many shortcomings based on previous versions, namely, bugs with shadows, lods and collisions have been fixed. Outdated and battered cars added. Now on the virtual roads of the ETS 2 simulator roads there is not only a brand new motor vehicle, but also seen species and rusted in some places. In addition, the developers carried out optimization, which positively affected the correct operation even on weak computers.

The mod of Russian traffic for Euro Truck Simulator 2 will most of all appeal to fans of additional locations displaying Russian maps, like the Southern region and the like. Of course, those who have already installed this kind of modification know that it’s quite unusual to see nameless cars against the background of Soviet high-rise buildings, roadside buildings, road signs and gas stations. Now the Russian atmosphere will not be spoiled by anything, and Soviet and Russian trucks and cars will accompany the virtual trucker throughout the journey.

The authors implemented two options for finding cars in the simulator, in the first case they can be registered only in the Russian, Ukrainian and Belarusian territories, for this you need to connect the files in the manager:

And if you connect:

then the second option will work, in which the new transport will run on the standard and all installed additional maps.

Dear user of the site, choosing your favorite number and variety of vehicles on the road, we recommend you to download and install additional map for your version of the simulator ETS 2!
traffic pack
Previous modNext mod