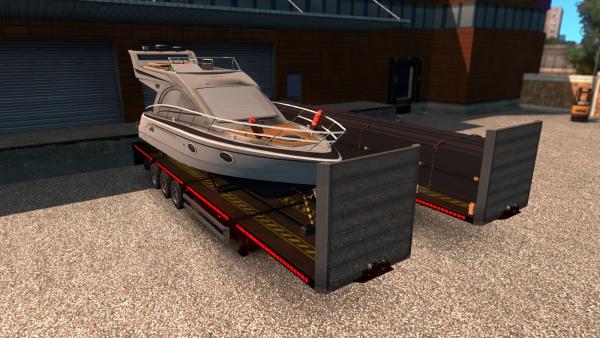 The new Flatbed cargo pack will be a great addition for virtual truckers of the ETS 2 simulator, who are fed up with ordinary tasks and want to diversify the gameplay. Although the pack is not very large, it is very diverse. In addition to several brand-new trailers, the mod for Euro Truck Simulator 2 has very unusual cargoes, such as an airplane, several different ships, ammunition boxes, and even a cage with an elephant weighing no more than 25 tons.

We will not see all new cargoes and trailers on the roads, since they are registered autonomously, and do not participate in traffic, so stable operation with similar modes, for example, Big Heavy Pack, is fully guaranteed. All models are well detailed and have high resolution textures.