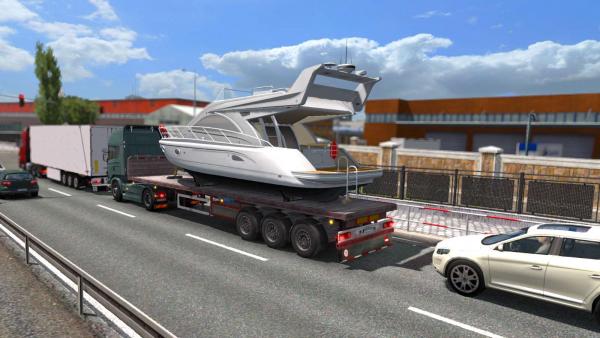 The popular computer game ETS 2 was originally developed by the authors as a simulator of a trucker carrying goods and receiving virtual currency for this, which, in turn, can be used to buy trucks, upgrade them, hire drivers and develop your own transport company. But unfortunately, the developers did not provide for a wide variety of goods and platforms being transported, but thanks to the efforts of third-party authors, more and more trailer and cargo mods are appearing every day, among them a new addition containing 85 units of new semi-trailers with various cargoes fixed to them.

Mod Trailers Pack for Euro Truck Simulator 2 from the author satan19990 is made with the highest quality. The set contains semitrailers covered with an awning with logos of well-known brands, as well as tanks, containers, on trailers are placed both ordinary goods, and peculiar, like a 62 ton tank or a locomotive weighing 75 tons. All models included in the supplement look very realistic, which gives the virtual game world more realism, which increases the popularization of the project.

You should know that after installing and connecting the modification in the profile, you need to wait a while for the appearance of new trailers with loads at the bases, or restart the game.

It's time to transport new types of cargo. But on ordinary platforms, their transportation will become very difficult, so the authors added 68 new high-quality platforms to the modification. Trailers...