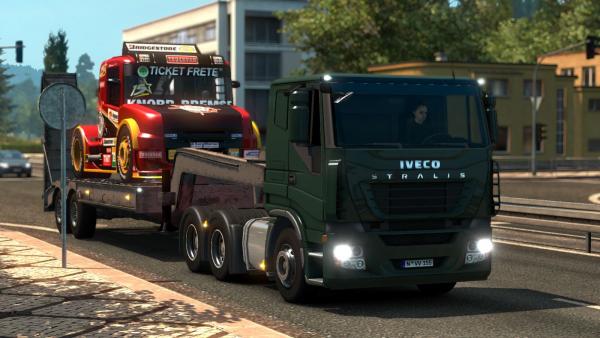 The add-on successfully works with any version of the ETS 2 game. The advantage of this mod is not its uniqueness, but in the number of goods and trailers that we will get as a result. In this regard, all competitors are left behind. In the role of the developer is a well-known user under the nickname: Jazzycat, who managed to release a lot of high-quality mods.

With regards to the specifics, we get 173 semi-trailers by the total. We will be able to work with goods, the amount of which is 736 units. That is, any kind of cargo, any size, all this in Euro Truck Simulator 2 will be available to us. The number of trailers is also huge: 744 models. According to the skins of the trailers, the developer did not offend us, there are more than three thousand of them. What a variety of mods the simulator makes, you yourself understand. Now flights will be much more interesting.

And where to pick up loads or explore new trailers? There are bases for this. Over one hundred companies are provided for you. Each of them has its own models. The location of the bases is also spread out. Some bases are located on the Russian map, others in the Southern region and in other territories localized on both standard and autor's maps.

A separate advantage of the modification, excellent compatibility. Risks of errors are minimized. There is no need to dispose of standard goods. New models are added, and do not replace existing ones and many necessary ones.

You will find a large number of semi-trailers from domestic manufacturers. And they are MAZ, NEFAZ and other well-known companies. Therefore, if you are attracted to Soviet technology, then the appropriate model of semitrailers will definitely be needed.

For the Russian version, the following files should be in the mod folder:

Each player is bored with the implementation of monotonous tasks over time, so it's time to add a huge number of new trailers to the game. In this package, a virtual trucker will find many new...

It's time to transport new types of cargo. But on ordinary platforms, their transportation will become very difficult, so the authors added 68 new high-quality platforms to the modification. Trailers...