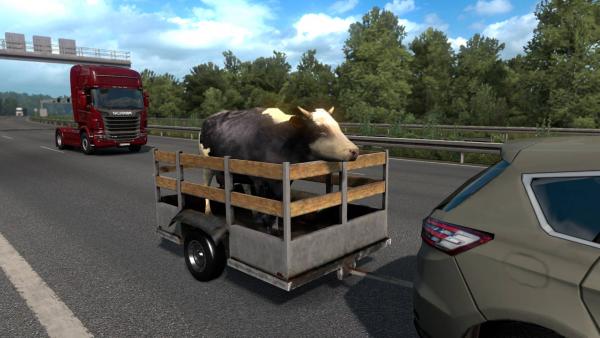 Variety in traffic, that’s what is sometimes lacking in the game world of the ETS 2 simulator, so the authors of the modifications are constantly creating new additions to the new traffic. For example, in Brazilian traffic, you can see covered passenger trailers with cattle, a similar thing can be seen in the new version.

The Animal trailer mod for Euro Truck Simulator 2 has a small size and is not demanding on resources, and is also compatible with all traffic packs. After its installation, cars with trailers will appear on virtual roads, on which animals are placed - cows and horses of various colors, which have their own animations. All models are made in high quality, and create the illusion of realism.

Dear user of the site, choosing your favorite number and variety of vehicles on the road, we recommend you to download and install additional map for your version of the simulator ETS 2!
trailers traffic
Previous modNext mod