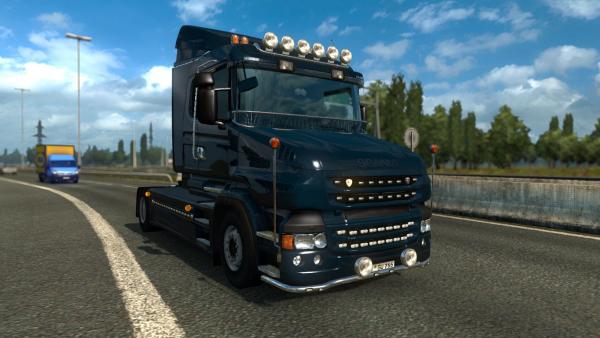 Scania T Mod is for those who are interested in tuning trucks under the Scania brand; The addition is currently the most effective way to upgrade tractors. Externally, the truck can be made truly unique. But most importantly, with the advent of the mod, the simulator will even work on the filling of tractors. That is, we will be able to deliver a more modern gearbox, install an engine with sufficient power, capable of carrying heavy cargo.

Separately, you do not need to download engines, gearbox and all other spare parts, everything is included. Including wheel formulas, all kinds of lighting equipment. And for tuning, numerous plastic parts are provided, they can be given any color. On plastic parts, of course, tuning is not limited. Other elements in Euro Truck Simulator 2 will be enough.

The standard Scania truck registered in a separate Scania Megamod slot takes on a completely new look, as the tuning kit includes a large number of additional elements. Among them are new fuel tanks,...

With the new tuning for Iveco Hi-Way, the standard tractor takes on a new, individual look. The collection of additional elements contains a significant number of new chassis options for greater...

The new mod of additional elements for tuning from Ohaha will help the virtual trucker to give the standard DAF XF Euro 6 tractor a unique look not only externally, but to diversify the interior of...

The Scania illegal V8 truck, known to many for its popular truck manufacturer, Scania, has eighteen engines with 3,000 horsepower. The original chassis with modifications to the interior of the...