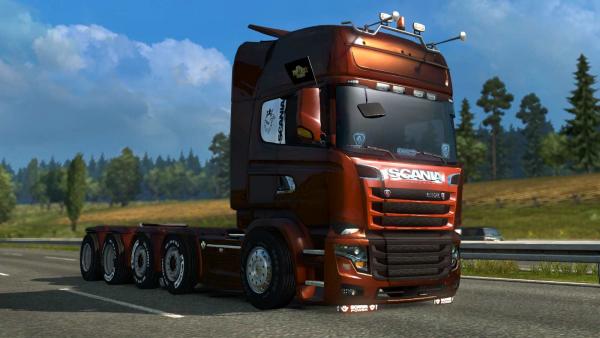 The Scania brand should be familiar to each of you, since under this brand some of the most famous and noticeable tractors are produced, one of which will now show off in your game. This is the new Scania of recent years, recreated by the authors of the mod specifically for ETS 2. Several prototype cabs, original chassis options, are not typical for all tractors, eighteen engines differing in their capacity, capable of carrying oversized cargo. One of the engines is based on 3,000 horsepower. There is a different interior, many useful parts that allow you to tune the vehicle. Attachment points are also included!

The capabilities of Scania illegal V8 are incomparable with any other model. Everything has been worked out in detail in the mod, the handsome heavy truck with incredible power under the hood will become the decoration of Euro Truck Simulator 2!

There are chrome elements, classic plastic, repainted. You can choose the color of the cabin lighting, change the exhaust pipes, change the skirts, install spoilers, even such a trifle as mud flaps can be upgraded. The set of accessories is huge. Therefore, we do not recommend avoiding this magnificent mod!

Dear user of the site, carrying out the transportation of goods on the virtual roads of Europe, for a variety of gameplay, do not forget to download and install new maps for any version of the simulator ETS 2!
Scania truck tractor
Next mod

The new mod is able to turn the Scania tractor into an elite heavy truck. A wide range of spare parts provides the player with an unrecognizable ability to decorate his truck, in the set you can find...