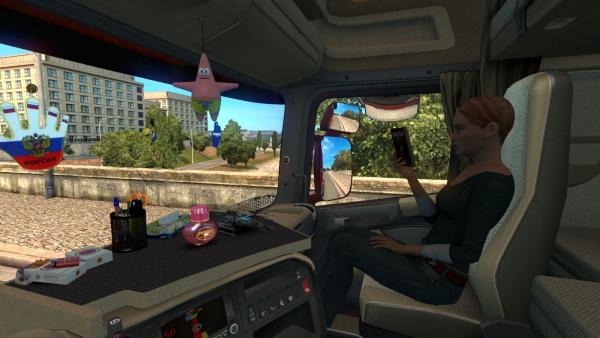 Each self-respecting player seeks to create the maximum individuality and originality to his truck. There are practically no problems with the external transformation of the car, since the standard set of upgrades has quite a few elements to improve the appearance of the truck. The most demanding virtual truckers complement the ETS 2 game with original modifications by well-known developers, such as Ohaha with a tuning mod for DAF XF Euro 6. Using the spare parts included in this kit, any driver can turn his tractor into a vivid picture.

But what about those who want to decorate the cabin, in which you have to spend long hours of playing time? For such gamers, the SiSL's Mega Pack mod appeared - Star Wars DLC for Euro Truck Simulator 2, in the assortment of which there is a huge number of components for changing, improving and replenishing the interior of the interior of the driver’s cabin. You need to know that for the correct operation of the simulator must be installed and activated DLC Cabin Accessories. The driver will be pleasantly impressed by the number of cans with drinks, mobile phones, electronic devices placed on the windshield, toys with their own original animation, mugs, flavors, magazines and other objects that can be placed on the dashboard and in different parts of the cab. In addition, fellow travelers can be put in the front seat, they can be beautiful girls, a forwarder, or even a character in a popular computer game.

Heavy trucks Ford F-MAX has repeatedly conquered the virtual roads of Euro Truck Simulator 2. This time, the authors of the modifications presented another tractor mode. The developers implemented an...

The new mod of additional elements for tuning from Ohaha will help the virtual trucker to give the standard DAF XF Euro 6 tractor a unique look not only externally, but to diversify the interior of...